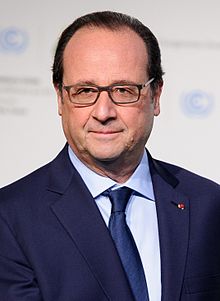 
1) The placement of Moon, Mars and Rahu in the 8th house in the sign of Sagittarius makes President Hollande has Mangal Dosha. He would be deemed Manglik. This term simply means a person has Mars in in the 1st, 4th, 7th, 8th, or 12th house of their birth chart.
The 8th house in (Mars) gives someone with this placement courage to fight until the end. In many occasions, President Hollande comes out as a winner. Additionally, there is a combination of Moon + Rahu in President Hollande’s chart, which makes him emotional. He reacts from his heart and thus shows he has a soft heart.

2)  Then we see Jupiter + Ketu in 2nd house, in the sign of Gemini. This is a bad combination as it gives many enemies and sometime it’s difficult to judge the right person at right time.
President Hollande won his term in 2012 and to lendsome light here, I want to mention that he was under the transit of Jupiter + Mars. This combination indicates he was in for a big change in his life. Mars which is powerful in his chart made him President.

3) Thirdly, there is the placement of Venus in the sign of Virgo in 5th house. This gives President Hollande great knowledge of science and how to make new discoveries.
4) Then, we see Saturn placement in the sign of Libra in the 6th house. This is a wonderful placement in his horoscope. This placement lends him power to become more financially sound and lend flexibility to France.
President Hollande is currently under the transit of Saturn which started from March 2015 and ends March 2018. Additionally, he is under Saturn Sade-Sati (7.5 years Saturn transit) which started from Nov 2014.
This placement enhances his courage to fight and win, so it is a “win-win” situation for the President.

5)This is only one side of the coin as we need to compile and analyze the report for the other presidential candidate. As all my readers know, when I analyzed the Trump victory, prior to that we compiled and analyzed Hillary Clinton’s horoscope. We compared charts for both and realized President Trump’s planetary positions were much stronger than Secretary Clinton.

Anyone who need horoscope reading then feels free to message me.